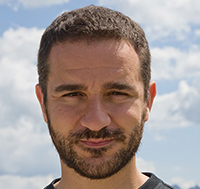 Andrea Mezzotero started designing games “seriously” in 2014, joining a group of designers in his city, Bologna, but has always possessed a passion for inventing games.