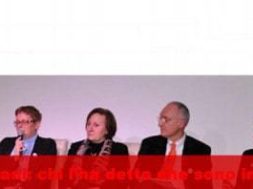 Other talks for Venezia Cambia:
– March 2015 The bad administration of the Venetian Casino
– November 2015 Italian Casinos: who says they are in trouble?

On March the 2nd, during the financial statement of the City of Venice, the City communicated the informations about the economical situation of the Casino. Here below the list of the past years’ balance:

And now some comments.

The incomes have decreased from 200 to 100 millions in ten years, but the expenses stayed almost the same each year, between 64 and 84 millions. In 2014 the expenses were 72 millions, not the lowest, as it was for the incomes of that year.
The column about percentage between costs and incomes is even more impressive: until 2011 it was never more than 40%, with the lowest percentage registered in 2005 (36%), meaning that expenses were never more than half of the income. Since 2012 this percentage rises up to 75%. This means that the Casino is spending 3/4 of what it earns for its (bad) management and administration; adding taxes and previdential costs you end up with 16 millions.

Really not much, but still something.
So if this is the situation, the citizens do not understand why after only 3 months the financial statement of the Casino showed a loss of 6 millions (didn’t we say that it was an income of 16 millions?).
The newspapers would say things like:

Gazzettino, June 12 2015
Casino, the black hole of heritage
How the former goldmine risks to sink the City

Nuova Venezia, June 21 2015
The Casino Company in danger. Failure?
In spite of the constant refundings, the Cvm has to be recapitalyzed before September

So a citizen may download the financial statement of the Casino and face a 160 pages document. These pages are very hard to understand and made in a way that one may think that the document doesn’t want to be transparent. It is clear that there is a financial magic trick beneath it: we should really talk about this!

Let me anticipate some aspects to understand a bit more about it.

Company structure
The City of Venice owns the Casino of Venice.
It owns 100% of CVM S.p.A., who owns 100% of CVM Gioco, who owns 100% of Meeting & Dining. So… some sort of a chinese box of owners. Uhm… this already sounds pretty strange, but the people in charge justify themselves, saying that by doing so, they are able to give the gaming company to privates; we know very well that no international companies have shown any interest in the Casino at these conditions.
May we talk about this?

The agreement of the City
There is an agreement between the City and CVM: the Casino gives all its incomes to the city, who gives back to the casino 75% and keeps 25%. No matter what the income will be, the proportion is always 75% and 25%.
Now, in 2014 the Casino cashed a bit more than 100 milions (96 plus some entrance fees and tips), So the City kept a bit more than 25 milions, 25% as the agreement wants.
We have seen that in 2014 the income has been of only 16 millions.
Who guarantees for the losses if not the very same City who is its owner? So why this whole operation?
So the City has an agreement with itself (since the Casino is its property) and then it intervenes when things go wrong?
This kind of agreement could work if the owner was a private person: I give you the opportunity to use my company, you give me 25% of your incomes, if you have any losses it’s your problem.
But what is the point of doing this to yourself?
Can we talk about this?

Debts
Not enough? The CVM has to pay 2 and 1/2 milions every year to the banks for a loan of 60 milions that the City obtained (but there is no proof that this money has been used to construct the main land building). Since 2012 this debt is in the hands of the CVM, who has no personal incomes (because the incomes are made by the CVM Gioco).
Then the City sold the palace Ca’ Vendramin Calergi for 40 milions at the Casino (to itself?) and therefore there are more debts.
And this is just one part of all the debts.
Can we talk about this?

Meeting & Dining
Also this company is declaring losses. The titles of the newspapers are clear:

Gazzettino, June 5 2015
Casino, a restaurant for very selected people
About two clients each day dine at the “Wagner” restaurant of Ca’ Vendramin Calergi

Then one finds out that this company is involved with the Casino and even the online gaming. Are we in good hands? Oh well…
Can we talk about this?

Staff
A citizen may open the 2014 Financial Statement and find a nice scheme that shows the staff divided in different duties, in various years. Fine. It goes from 628 people in 2010 to 576 in 2014 (since there are some part time jobs, we count 548 full time), for a total cost of 43 millions. The staff has decreased less than 10% (much less than the lowering of the incomes), and the average cost of an employee is €80.000 every year.
Then the same citizen may check out also the confirmed Financial Statement and find out that there is another scheme with different numbers!!! The employees become 658 (652 full time), for a total cost of 48 millions (each one costing €74.000).
Is this due to the chinese boxes system?
Can we please know how many people work in the Casino, what they do and how much they get payed?
Also the number of executives changes at each Financial Statement, and some people that are better informed, tell me that there are about 30 outlines. What should we do with them?
But then there are those “complicated” jobs to do: move a table, change a bulb or clean something… and of course the Casino needs to call some workers from outside to do these jobs! Oh well!
The staff is exactly the point from where it should be necessary to start from. Many people that work there have very good skills that they are just waiting to demonstrate, besides just receiving a good loan.
Can we talk about this?

Administration
One could actually write a horror novel about this issue, but this is not the right place to do it. Just a few words on it.
On the Financial Statement one reads that “All activities are done for the purpuse of satisfying clients as much as possible”.
My personal experience tells me exactly the opposite.
Maybe they are talking about the clients that hang out there just for the parties, shows, between coffe and prosecco? Do they really think that these people will become the good clients of the Casino?
And how does the Casino measure this, since it doesn’t have a tracking system of the clients expenses?
To get an idea, lets ask the poker players what they think. They don’t have the possibility to play cash anymore, and have less and less events to attend, most of the time in a tent outside of the main land building, without bathrooms; what about when for the free roll the Casino hands out just the guaranteed tickets although it gained much more money? Is this the best way to satisfy the clients?
Can we talk about this?

This nightmare should really stop. Please help stop the chinese box companies system, please stop the financial real estate magic tricks and the use of the Casino as it was a cash machine.
It would be nice to make a plan for a new modern Casino for Venice.
Starting from the use of the skills of the many good employees that are now doing almost nothing.
Getting rid of the huge waste of money.
Chasing away the people responsible for this situation and finding a way that blocks these “barons” to come back.
What has to come back are the profits and the success of the Casino!

Let’s talk about it