“A very intense meeting!
Many different philosophic thoughts have emerged about the gambling problems, it has been useful to talk about it and to compare our opinions.
On one side there are persons who start from the law point of view, trying to find new rules about the issue. The law contains some positive elements: for example the use of the health card in order to verify someone’s age, the prohibition of comemrcials, the introduction of alerts during a game and prevention in schools.
On the other side, who considers this regulations too soft and not enough good to fight the criminal system: and so there is an increasing “popular resistance”; will it be able to push the policy? Considering so not only profit, but also the enormous social costs?
Thank goodness, at least we can all agree that the positive values ​​of the game can help rebuild the sociality that is configured as a real antidote to the alienation of the slot machines.
Perfect the setting of the Tocatì of Verona, a great and beautiful Festival, dedicated to the culture and sociability of the Game. We will continue the discussion during other events, for sure at the emerging Carrara Show, scheduled from May 30 to June 2, 2015.
Thanks then to Uisp, GioNa and AGA, who helped organize the conference, all the speakers and those who have heard. In a few weeks a complete recording of the meeting will be available.”

The interview to Dario De Toffoli, after the meeting 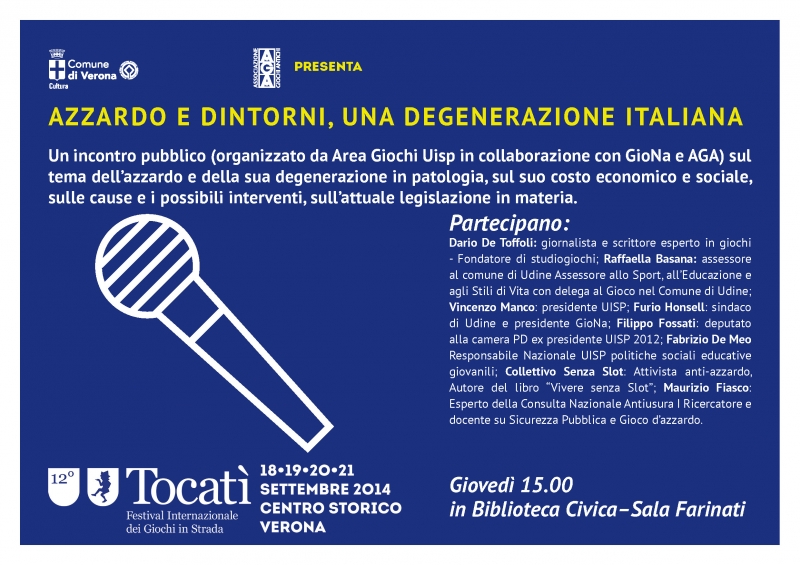 In particular the many explained issues were about:

Historical analysis of the phenomenon, from the birth of the “Public Game” in the Italian regions of the thirteenth century.
placement of gambling in the framework of Games.
Quantification of what comes out of the pockets of Italians, comparing it to other countries.
Summary of legislative changes that allowed (or rather, made possible) the current anomaly on the Italian gambling machines outside casinos.
Links between certain types of gambling and mafia, even viewed from the standpoint of the perverse mechanism of dealerships.
What can realistically make local authorities to solve the problem.
What can get a kind of public “resistance”.
What preventive actions – and not just healing – can be taken, including the proper divulgation of mathematical informations about the games themselves, to make everyone more aware.
Analysis (and judgment!) of the national law in preparation and consideration of what further actions can be taken.
Clarification of the importance of talking about “azzardopatia” (hazard addiction) rather than “ludopatia” (gaming addiction)… but this seems well established!
Evaluation of alternative therapeutic approaches.
Finally a requested of public initiatives for the enhancement of the cultural and social game, the real one, the good one, which can serve as an antidote to the degeneration.