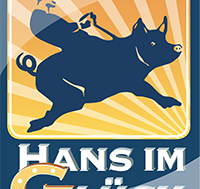 Small but prestigious german board games publishing house. Born in 1983, its greatest success is Carcassonne, that sold only in Germany more than 4 milions of copies  and has been translated in 20 languages (In Italy it has been imported by Venice Connection).
Besides the Spiel des Jahres 2001 that the publishing house won with the same Carcassonne, Hans im Glück won another four with Drunter & Drüber by Klaus Teuber in 1991, Manhattan by Andreas Seyfarth in 1994, El Grande by Wolfgang Kramer in 1996, Thurn und Taxis by Karen and Andreas Seyfarth in 2006 and Dominion in 2009. In spite of its great success, it keeps running thanks to the work of just a little number of people, coordinated by its founder Bernd Brunnhofer.