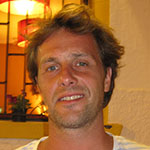 Daan Kreek lives in Amsterdam with his wife and 2 kids. He is a Dutch independent game inventor, publisher and agent. After finishing his studies (organizational psychology) he started working in the tv industry where he was asked to come up with quiz questions but also new easy to explain game concepts. His next job was to be general manager of a kids theme park. But only after starting his job as production development manager / category manager at Royal Jumbo he realised puzzles and games are his thing! He started his own company (obviously called) ‘Puzzles & Games’ in 2009 and managed to find publishers for some 20 of his concepts. His games are mostly very easy to understand and make sure you learn something without you knowing it as a player. His concepts can be for kids, adults or families. Furthermore his concepts can be party games, dice games, card games, quick reaction games, action games, quiz games, abstract strategy games and all sorts of (jigsaw) puzzle concepts. Actually the only type of game he does not come up with is strategy games since it takes too long to develop and would have too much competition in the world. His first game called Hyves Ranking Game was nominated for the Toy of the Year award and sold over 110k copies in Holland only! Some of his other important games are: LOOK!, Abra Palabra, Copy or not copy, Picture Party, Shop Hop and his self-published quiz game Questions & Answers. Studiogiochi published his game Word Up! (as part of Pass the Bomb – Family) and will release his game Wizard Würfelspiel in Essen in 2019. Last but not least Daan loves playing games (with his kids, family members or friends), doing sports and cruising the Amsterdam canals in his ancient German boat.