Here is the list of qualified partecipants for the live final on April 9th ​​in Rome!

Congratulations to everyone, you were relly numerous, and for this reason we have decided to expand access to the final to 120 participants (including the best results of the previous three editions as stated in the rules).
Qualified participants will receive an email with all the instructions to follow in order to better organize the live final, which will take place on 9th of April at the Luiss University of Rome.
More details in the coming days.

Thank you all for participating, and we hope you enjoyed playing with the numbers!

From today all registered members of the Italian Mental Calculation Championship can check-in at the online selection competition which will take place on Saturday 19 March 2022 starting at 15:00.
Check-in is a necessary step in order to access the competition platform. All subscribers have received instructions on how to do it to their email address (the one communicated at the time of registration).
The competition regulations can be downloaded from the menu on the left, and with access to the competition it is considered accepted and signed.

At the end of the selection, the best among the participants will be announced on this page (there is no ranking for the online selection), who will qualify for the final scheduled in attendance on 9 April 2022 in Rome, at the LUISS University.
In the days following the conclusion of the selection, the qualified will be contacted by the organization, which will provide all the information and facilities to participate in the event.

It is possible to register up until 13:00 of the day of competition (19 March 2022), by sending your personal details to calcolomentale@studiogiochi.com

The rules of the Mental Computing Championship 2022 are available in PDF format, in the menu on the left.

Furthermore, we would like to point out that the online platform where the selection will take place is currently undergoing maintenance.
During the next week, all participants will receive instructions to complete the check-in to their registration email.

The training test to prepare for the 2022 Mental Calculation Championship is available in PDF format, in the menu on the left.

The test is unique for all categories.
In each paragraph the questions are proposed in order of difficulty and it is not necessary to answer all of them: everyone should reach as far as they can answer. Broadly speaking, the questions with a WHITE background are accessible to everyone, those with a LIGHT PINK background already require a certain level of preparation and those with a DARK PINK background can only be solved by those who are truly experts.

So go as far as you can, the aim is to participate and have fun… not necessarily become a champion.

Many of the operations proposed in the test may appear more difficult than they actually are, but in reality there are shortcuts that greatly simplify the solution. All the possible shortcuts are dealt with in the volume Il grande libro del calcolo veloce e mentale (The great book of fast and mental calculation) by Dario De Toffoli, which will be distributed by Kangourou in the second half of February to all schools belonging to the Association and in the same period it will also be available in bookstores in the Mondadori edition. 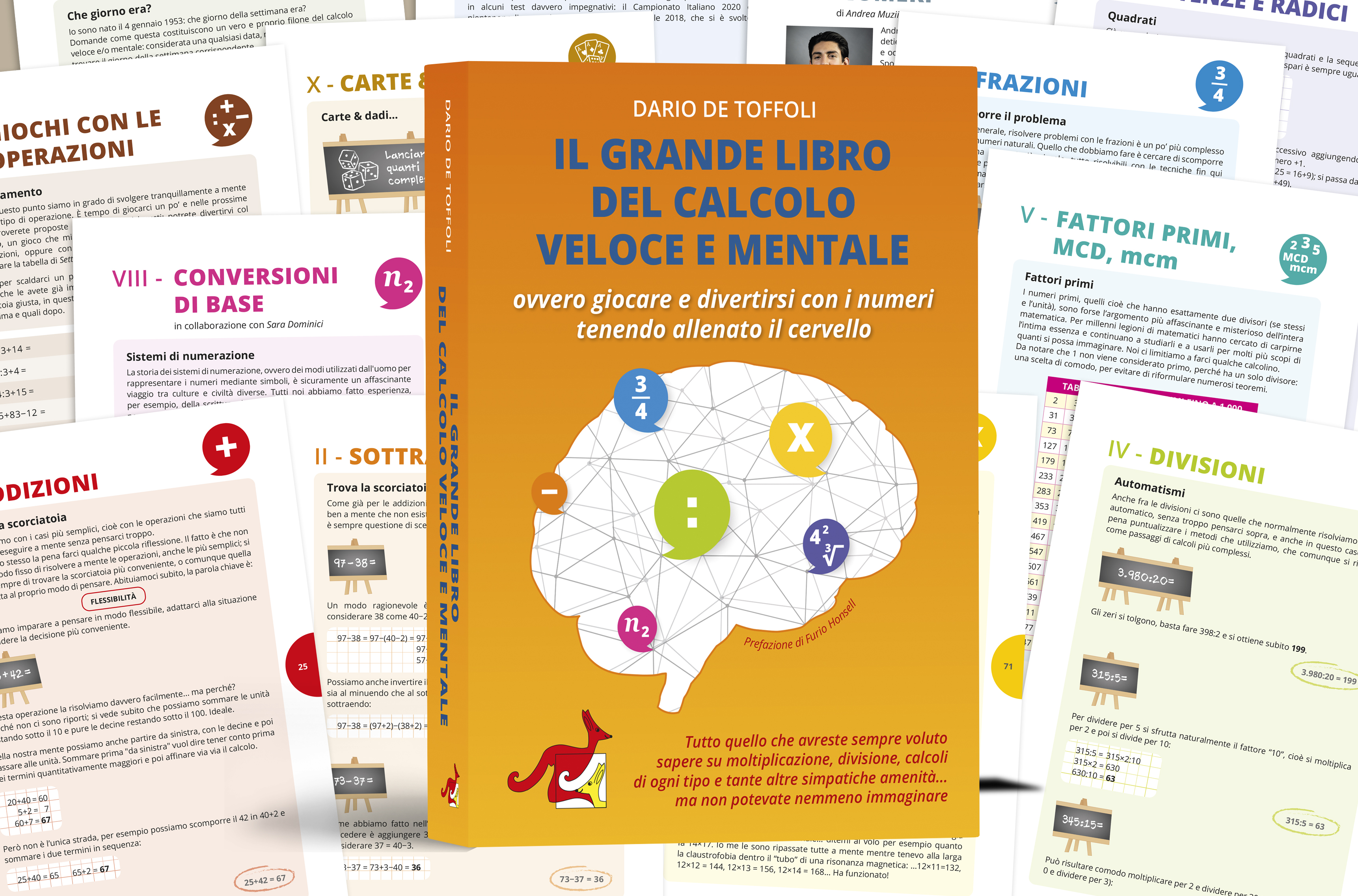 1 January 2022: REGISTRATION
Registrations will be open and the complete competition rules will be communicated.
Just send an email with general information and contact details (the more formal document will be required at check-in); registrations will be made by individuals (not schools) and will be free and open to all Italian citizens and all residents in Italy, without any distinction.
Subscribers will receive a password with which they can try again the last year’s selection test, with the aim of both training and above all to become familiar with the platform on which they will then have to compete; all instructions for accessing the platform will also be provided.
It is possible to do the registration until the day of the competition (19th March 2022).

Second half of February: BOOK
All schools that join Kangourou will receive Il grande libro del calcolo veloce e mentale (The great book of fast and mental calculation) (Dario De Toffoli, Kangourou, 2021, pp. 487) and an invitation to suggest to their students to partecipate to the championship.

All subscribers will receive an address and a password with which to check-in: they will have to fill in a form with all the release clauses for privacy, acceptance of the regulations, etc.
Those who have checked in will then be able to access the actual selection competition.
The race can be started at any time between 15:00 and 15:20 and will last a maximum of 80 min. The number of competitors admitted to the final will depend on the general health regulations, as well as on the number of participants in each category.

Among the guests have already confirmed personalities of the caliber of Furio Honsell (Mathematician-computer scientist, former rector of the University of Udine, as well as past mayor of that city), Andrea Muzii (World Memory Champion), Andrea Angiolino (Historian and popularizer of game culture), Ennio Peres (the “Giocologist” par excellence). But we are waiting for other amazing confirmations!!!

All the participants compete for the absolute title, but the best “OVER 60”, the best students of the HIGH SCHOOL and the best of the MIDDLE SCHOOL will also be awarded; any elementary students will compete in the MIDDLE SCHOOL category… after all, the World Champion of Mental Calculation is 11 years old and is Indian.

We are pleased to announce that the next Italian Mental Calculation Championship will take place on 9th April 2022 in Rome, at the LUISS University and in collaboration with Kangourou. In the flyer the very first information.
Anyone who wants to receive all the information as the details are fine-tuned can send a short message to calcolomentale@studiogiochi.com to be added to the mailing list.

CHRONICLE OF A BEAUTIFUL CHAMPIONSHIP

Over 400 participants, of all ages.
A hundred finalists who met live on April 9 in the magnificent headquarters of the Luiss Guido Carli University in Rome.
Perfect collaboration between us at studiogiochi, Angelo Lissoni and his meritorious Kangourou and Luiss herself and in the end we are all really satisfied.
The photo gallery is however self-explanatory.

The venue has changed, the structure has changed… but in the end the title of Italian Champion remained in the hands of Domenico Mancuso from Turin, che se lo aggiudica per la terza volta consecutiva, con 381 su 400. who won it for the third consecutive time, with 381 out of 400. Second with 377 Michelangelo Sabatini and third to complete the podium Giovanni Battista Scambia with 375.

Among the high school boys Gabriele Podda from Udine won with 353 points, a boy who had already shown himself in excellent light in previous editions.
We had a great and very pleasant surprise among the middle school kids, and in fact Samuel Stripoli from Bari won with a stratospheric score of 354, which places him in 8th place overall.
Among the seniors, the Neapolitan Ciro Annunziata, an old fox of competitions of all types of board games, has imposed himself.
In the photo gallery the images of all the winners with their diplomas and herethe ranking of the top 50.

But the day wasn’t just the competition! While the team coordinated by Piero Modolo scrupulously corrected all the tests, on stage guests “truly exceptional” took turns.

Applause to the “playologist” Ennio Peres who was unable to join us for health reasons, the legendary Furio Honsell began; after having presented Il grande libro del calcolo veloce e mentale (The great book of fast and mental calculation) by Dario De Toffoli with all too flattering words, he ranged between Shakespeare and Dante, Buzzati and Ionesco and many others, leaving the crowded audience of competitors and companions breathless.
Then it was the turn of Irene Finocchi, Luiss delegate for Digital Transformation, who proposed a sort of computer version of the Mastermind, thrilling the young people present.
Andrea Muzii, World Memory Champion, left everyone speechless, giving a small sample of his incredible abilities and then explaining how much creativity counts in memorization techniques: a real star!
Andrea Angiolino closed the session with a learned historical excursus between games and numbers.

But above all it was a beautiful and joyful atmosphere and we like to think that for many it was a positive and indelible experience!

The history of Mental Calculation in Italy was born a little by chance. In 2016 Angelo Lissoni invited Dario De Toffoli to give a small conference in Cervia, on the occasion of the finals of the mathematics competitions of Kangourou Italia, the association that every year makes almost 100,000 children play mathematics. De Toffoli tells something of the mental calculation, which he experienced in London during the Mind Sports Olympiad, the thing is interesting and immediately that same evening an impromptu contest is organized, among the general entertainment.

In 2017, again in Cervia, the first national tournament. A real party that celebrated the meeting of Mathematics with Playing: we played with numbers and we had fun. Furio Honsell underlined how much this practice can contribute to mental well-being, a real elixir for the mind that in the meantime trains itself to be more and more flexible.

From there to a real Italian Championship the step is short, it took place in Udine on the occasion of the Pi Greco 2018 festival, organized by the Italian Games Archive, always in collaboration with Kangourou Italia.

Another Udinese edition in 2019 (just before the pandemic) in which the Turin Domenico Mancuso prevails and again in 2020, this time with online selections and a small final in attendance, in which Mancuso manages to do an encore, confirming himself as the man to beat.

In 2022 new steps forward, the Championship arrives in Rome at the prestigious headquarters of the Luiss Guido Carli University. Over 400 competitors of all ages participated in the online selections and the best 100 competed at Luiss to win the title of Italian Champion. Mancuso has won again!
Category titles were also awarded for best middle school competitor, best high school competitor and best over 60s.
It was a beautiful and joyful party, where the playful spirit was accompanied by a healthy and stimulating competition. The day was enriched by a series of top-level speakers, who entertained competitors and companions in anticipation of the results.