Dario De Toffoli for the University of Trento 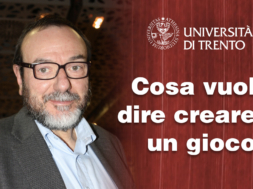 Dario De Toffoli for the University of Trento

WHAT DOES IT MEAN TO CREATE A GAME

On the 1st February 2022 Dario De Toffoli gave a lecture on “What does it mean to create a game” for the University of Trento.
The intervention was the first of a series of training sessions organized as part of the project Matematica in Gioco, and was aimed at students (high school, master’s degree in mathematics and doctorate), as well as researchers and professors involved in the initiative.

The project Matematica in gioco is a school-work / PCTO alternation path organized by the Popmat Laboratory and the Fablab of the University of Trento in which games designed by Mathematics students will be analyzed, perfected and physically created by a team of three-year students of high schools of different addresses (scientific, artistic, professional).

Among all the games developed in this context, one will participate to the Premio Archimede.