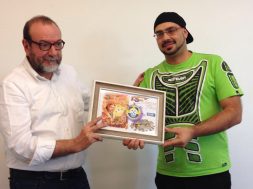 The prize was given by Ricardo Gomes to Dario De Toffoli, representing Tascini and Luciani, at the XX edition of Mind Sports Olympiad, held in London from 21st to 29th August 2016.