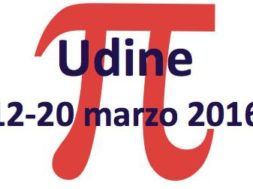 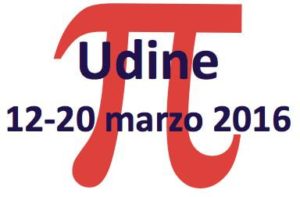 The City of Udine and its Mayor Furio Honsell offered this amazing event. Why Pi? Here their brilliant answer:

“…Through a joyful and cheerful atmosphere we want to encourage the knowledge of math and science in general”, “Spread Maths through games”… Maths lately has become more and more popular. The recent Maths Fesivals were very successful and very crowded. Many new magazines are coming out. Many movies and TV Series talk about Math. There are Math challanges in schools as well as in other places. Book stores sell novels about Math. And Pi has been chosen simply because it is among the most popular, evocative and mysterious mathematical constant (3,14), the ratio of a circle’s circumference to its diameter. Who in his life hasn’t ever been a little unconfortable about the impossibility of squaring a circle?

Just to know, the first Pi Day has been celebrated in 1998 in San Francisco, an initiative by the physicist Larry Shaw. Of course the chosen day has been March the 3rd (3.14) and its celebration should take place at 15, to continue the series (3,1415…).

Many institutions celebrate this day worldwide, most of them by eating tasty cakes.
March the 14th is also Albert Einstein’s birthday, so it is a very special day in Princeton, where Einstein lived for a long time.