Michele Comerci (Florence 1964), player. His father was an enigmatographer,  he grew up with games and specialized in boardgames, word games, abstract games, card games, logic games, dice games, puzzles, and more. (almost no Role Playing Games, wargames, Subbuteo, collecting cards, hide and seek and gambling).  He collected playing dice and similar objects. He took part to many ludic events and won in many different tournaments (from Abalone to Verba Volant); thanks to his eclecticism he won the prize Giocatore dell’Anno [Player of the Year] in 1995, 1996 and 1999. He organizes FirenzeGioca: a ludic event that in the last years is (incredibly) visited by thousands of people. He also organizes the Florence Scrabble Master, the most long-lived tournament of the world (of Scrabble in italian language).
He writes delirious articles for games reviews; he is co-author of several books about puzzles and word games; he takes care of the association Paroliamo e Contiamo Firenze and the association Mah jong Seipalle. He lately published under a pseudonym The Da Vinci code (no, actually this one is not true, unfortunately…).
He creates various games; among them Kripta (Premio Archimede), Zeon, Brazil and 2007 for tournaments “learn&play” at FirenzeGioca, I contadini (that became Pampas, but is still unpublished), I fiumi (that became Mississippi, published as Rio Grande by Piatnik). 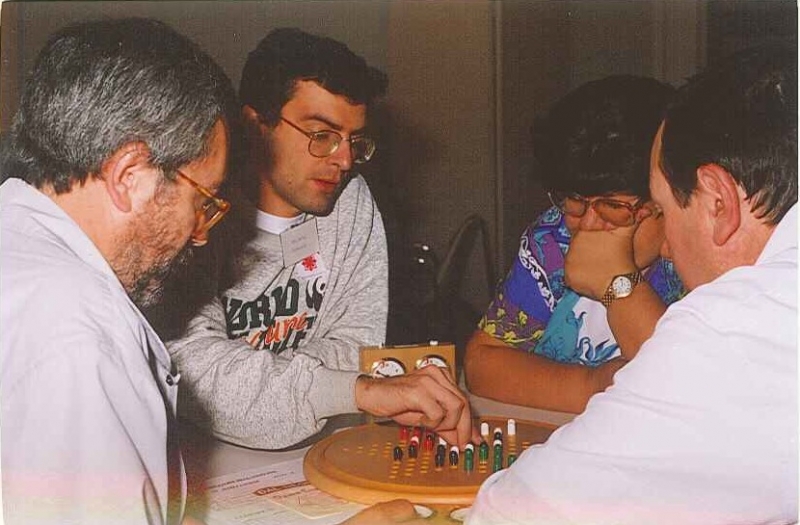