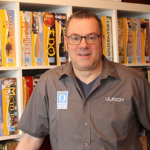 Ulrich Fonrobert is born in northern Germany in 1967. Games have been with him since he was a child, with his father teaching him the rules of classics like Chess, Skat and Doppelkopf.

He has been collecting games since at least 1979. He joined the German armed forces in 1986, where he used to play dice games with his comrades during otherwise boring evenings. Settlers of Catan and El Grande are two of his (many) favourite games.

In Kiel he found his first permanent gaming group with whom he got part in various board gaming tournaments and championships around Germany. So he met people like Christwart Conrad and Ralph Bruhn, and with their help he became part of Family Games in 2006 and additionally did work for Hall9000 as a reviewer for a short while.

In 2007 he entered in Queen Games, where he is now one of the company’s Product Managers, tasked with finding the most promising newcomers and novelties to the ever-changing market of board games. After attending GenCon twice and BGG.con five times he is now very much looking forward to whatever Premio Archimede might hold in store for him!