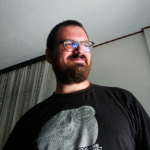 He has taken part many times in the Archimede contest, which he won two times, with Portobello Road (best card game in 2008 and his first creation to be published – by Piatnik as Frutti di mare – ) and Marco Polo, Premio Archimede 2012, then published by Hans in Glueck and winner of the Deutscher Spiele Preis.

In 2013 Simone began to work with the Italian publisher Cranio Creationswhere he has now the main role in selecting and developing games. In 2015 Simone left his teaching career (that lasted over 15 years) to be a full-time game designer.