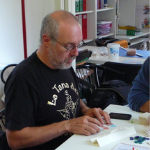 I begun to play when I was 10, and going to England I bought the game Bitzkrieg. I learned the rules and found only a few friends to play with… The passion for games went on anyway with D&D, and during my University years I played games from the Games Workshop, such as Talisman, Blind Justice, Merchant of Venus and Cosmic Encounters, which is I believe still my favourite game. In 1995, during the first Italian Internet experiences, I put on the first website about games, “giochi-on-line”. Both “Lobo” and “The Goblin” were part of it, and so in 2007 “La tana del Goblin” was born, to include all the people who love games. I traveled a lot and had the opportunity to be part of very many important game events: Origins, where I met Andreas Seyfarth, Gen Con, ComiCon… I have been invited by Alan Moon as first Italian to the Gathering of Friends, I have been invited as jury member for many games competitions, first of all the Premio Archimede, which has become a real springboard for Italian authors. I am not only crazy about german games, in fact I also love the american style in which hazard can change everything in a moment.