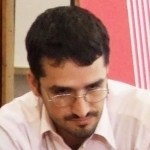 Born in the italian region of Emilia-Romagna, but citizen of the ludic world as a vocation. If he could just pack everything and go to live in the little feudal village of Caylus he would do it right away, but since it is not possible to survive by eating cardboard, he is satisfied by playing now and then at any kind of game.
Fond of “teleologic” explanations of rules (he typically opens his speach to the members of the jury of the Premio Archimede saying: “the player with the most points at the end of the game wins!”), he enjoys using any kind of possible skill to  take to pieces games and their mechanisms, test them and eventually reconstruct them. With an almost unbearable perfectionist attitude, which for a games developer is actually a value.
If he wasn’t part of our team, we would probably dislike him, but we love him the way he is.
He literally rules in “rules”: nobody is faster than him in reading new games rules (even between one turn and another, playing a different game), understanding it and explaining it to all the others, that in the meantime just thought about playing.
He is part of the Cogito team and contributes in fixing and adjusting new games: he helped to develope many of them.