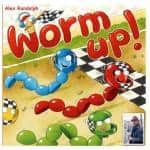 It’s the new edition of the game Vermi realized by studiogiochi and distributed all around the world by different editors.
The worms are running in a crazy race. At first you must understand what your opponents want to do. In fact at each turn, with the dice, you bid secretly how many segments of the worm you want to advance for that turn. If two or more players bid the same number, their bid is invalid. In this case the worms won’t move at all. So you have to guess if it is better to risk for a hig or a low bet. X means a bid for a number of your choice not bid by any other player. It also lets you move one of the posts at the final line! To win, the head of your worm must reach the final line.