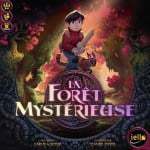 The Mysterious Forest is a cooperative memory game inspired by Daniel Lieske’s graphic novel, The Wormworld Saga.
After going through a magical painting, young Jonas enters a fantasy world. Players help him cross the Mysterious Forest and face the frightening Queen of the Draconias.
The game is played in three phases: During the scouting phase, the players look at each of the eight forest cards in play and try to memorize all the equipment they need to cross the forest. Then they prepare Jonas’ backpack by rolling the dice and trying to get the right pieces of equipment. Once ready, the players start the expedition by turning the first forest card face up and discarding the required equipment from the backpack.  If they can reach the final card and choose the right equipment before they reveal it, they win the game!

The Mysterious Forest, in addition to the nomination at the Kinderspiel des Jahres 2017, it won the silver prize at European Product Design Award 2017 and Seal of Approval 2017,  which is given by family testing and professional of education in the USA.

On June 2017, so much of studiogiochi in this Austrian game award!
Der Misteriose Wald by Carlo A. Rossi (edit by Iello) has been awarded the Spiele Hit für Kinder and Crazy Race by Alex Zucchini (Ravensburger) wins the Spiele Hit für Familien.