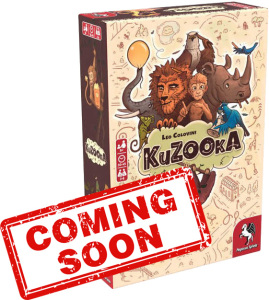 Being a zoo animal isn’t easy! The fences are too small for their needs, the daily routine is boring and the visitors are obnoxious, they often throw garbage in the fences.
After an unfortunate accident, the zoo plans to relocate some of the animals to an even smaller partner park in just eight days. This is the last straw! The animals decide to escape and want to escape from the zoo in the next seven days.

There are many ways to escape… but all that junk can finally be useful, if the animals can collect enough!
Unfortunately, the zookeepers clean it every morning.

And then there is an even bigger problem: how to make other animals understand their intentions? The monkey screams excitedly, the elephant roars loudly. But what are they saying? What items did they manage to collect? The animals have to find a way to communicate because… it’s time to leave the zoo!

KuZOOka is a cooperative escape game.