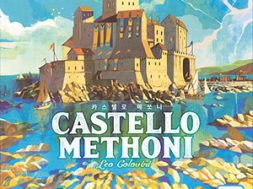 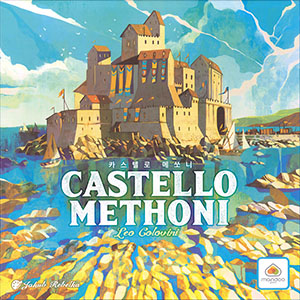 During the Byzantine years, Methoni retained its remarkable harbor and remained one of the most important cities of Peloponnese. The Republic of Venice had its eye on Methoni since the 12th century, due to its location on the route from Venice to the Eastern markets. Rich Venetian traders started to expand their territories with power and money to be a lord of Methoni which must be the promised most powerful throne.

In Castello Methoni, players attempt to take over castles, but with money, not military power. On a turn, a player plays a card of a certain terrain, builds a wall on the corresponding place, then places one of their houses and one other house on each side of the wall. When an area is closed by walls, it becomes a castle. When a player builds a castle, then they pay money to the players who have a house in the area. When a player builds a castle adjacent to another castle, they can merge the castle by paying money.

The game ends when no more walls or no more coins remain in the supply. The player who has collected the most coins wins.