The grid represents a corner of Central Park, where the grass (white spaces) alternate with the paths (black spaces).
You have to place the black spaces in the grid, according to the following rules:
• the black spaces are all connected with each other orthogonally;
• in the paths there aren’t any “squares”, meaning black areas made by 2×2 spaces or more;
• each number on the grid locates a grass, that is an area made only by white spaces and surrounded by paths or by the borders of the grid; the numbers show the amount of white spaces that form the grass (including the numbered space);
• two different white areas can touch each other diagonally but not orthogonally. 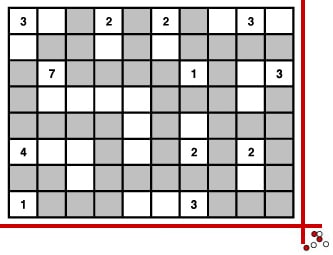