Home Puzzles Logic As much as

Sequence
Write a digit in each square so that the resulting number has the following feature: the digit of the first square should indicate how many 0s (zeros) are in the number, the second how many 1s, the third how many 2, and so on. Above each square you can read the value that has to be indicated.

Telephone
Complete the grid with the missing digits considering the numbers already shown. In the first empty square (to the upper left) you should indicate the number of total 1 (ones) shown in the 25 squares grid; in the second square (up in the center) the total number of 2, and so on until the final 0 (zero), going down as in a touch tone telephone. 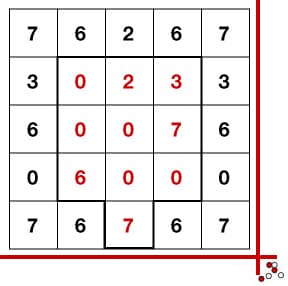